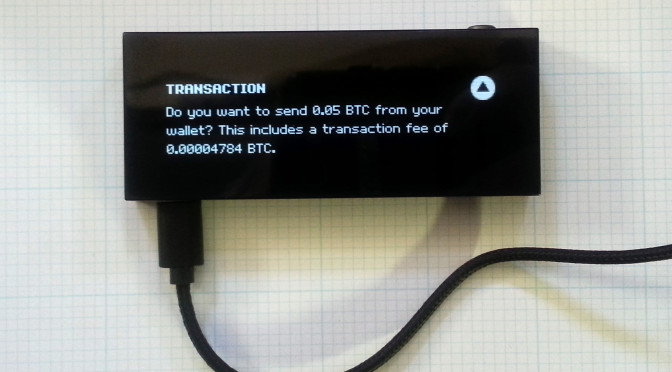 It’s nice when things feel as substantial and important as their function. Any reputable hardware wallet is a great idea for keeping bitcoin secure, but despite their utility some can feel insubstantial in your hand, almost cheap.

The KeepKey, though, looks and feels like something that would be at home on a CEO’s desk. The  2001-esque black obelisk is mystifyingly simple: one button, one microUSB port, and two sides. The metal backing is cool and reassuring to the touch, while the glossy black front hides a 3.12″ OLED which remains invisible until woken.

The soft glow of quality and simplicity starts as soon you open the box. The KeepKey comes with only a handsome braided black microUSB cable, a heavy, layered card for writing down your 12-word seed, a thick leathery sleeve for protecting the card and a set of instructions with only three steps on them.

The user is then led through the process of setting up the KeepKey, which is as simple as writing down their 12-word seed and choosing a PIN. (The PIN is protected from keyloggers via the smart PIN matrix, which scrambles the order of the numbers on the device’s screen and displays only a blank PIN grid on the computer itself.)

For those who’ve used the Trezor, the experience and interface is very similar, and that’s no accident. The KeepKey hardware and software is a fork of the Trezor ‘s, which is open source. That’s all good, since it’s what the folks at Satoshilabs intended all along –that their work would inspire other hardware wallets. It’s also good because one can hope that the diligence and obsessive concern for security that Satoshilabs displayed when developing the Trezor carries over to the KeepKey.

A screen that’s large enough to read bitcoin addresses easily is a nice differentiator for the KeepKey, and limiting the controls to one button makes the operation dead simple.

This is about as effortless as Bitcoin can be, and one really only needs the most rudimentary understanding of Bitcoin to use it. Send bitcoin from your KeepKey, receive bitcoin to your KeepKey, and as long as you keep your backup seed safe, you’re fine. There’s no complicated software or blockchain downloading to wrangle.

While the KeepKey site explains that the KeepKey also supports Litecoin, Namecoin, Dogecoin, Dash and Testnet coins, since the Chrome extension only offers Bitcoin that seems academic for now.

KeepKey does also work very well with MultiBit HD, and Electrum has support of a sort, but as of 2.5.2 that support is not built-in and requires the installation of additional Python pieces that will be more than most people want to dig into. The Chrome plugin is so simple and fast, though, that there’s little reason to wander beyond it.

Another differentiator from the Trezor, however, is the price, which at $239 is more than twice the price of a Trezor for very similar functionality – and the Trezor itself is sometimes criticized for its price, since competitors such as Ledger offer their own entry-level smartcard-based hardware wallet solution (the HW.1) for less than $20.

The extra polish and design touches might be worth the difference to many, however, and that might be just the demographic the KeepKey is after — people who will settle for nothing less than the Cadillac of bitcoin hardware wallets.