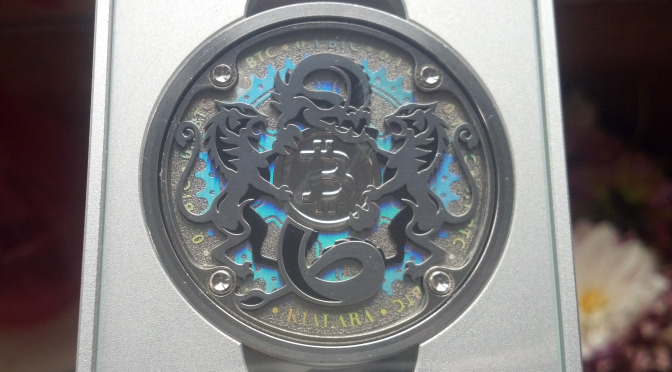 Sometimes someone takes an idea and refines it so far that it ends up feeling like something new entirely.

That’s the case with Kialara physical bitcoins, designed and produced by Maxfield Wyatt Mellenbruch.  On a fundamental level, these coins share a lineage with other physical bitcoins, since each is a cold storage wallet with the private key sealed inside.

In practice, though, these are extremely impressive art objects, each one containing 16 separate pieces held together by eight bolts. The coin in the center is beautiful on its own, a combination of gears, lions and dragons all bolted together as if a machine was dreaming about a coin. The coin itself is then encased in an equally elaborate bar-like object and safely bolted behind clear panes.

These are truly remarkable objects, beautiful to behold, complex and glittery and with a really satisfying feeling of quality to them. They seem more like a movie prop for some steampunk fantasy film than a cold storage wallet.

The artist’s brilliance extends through to the construction, however.  It would have been far easier to make something that looked complicated and evoked machinery rather than actually devise and execute an object with so many intricate parts that it does everything but move. Blink and it might start downloading the blockchain on its own.

Mellenbruch depicts the various layers and steps of construction here, including the application of red Loctite to the tiny screws, and the subsequent drilling out of the heads to further deter tampering. The result is like a coin from the future that suffered a detour by way of the steam age, to be hoarded and stacked like bars of crypto-mechanical glory.

Whatever madness drove Mellenbruch to over-design his creation this way, it’s our kind of madness, and we hope he never comes to his senses.