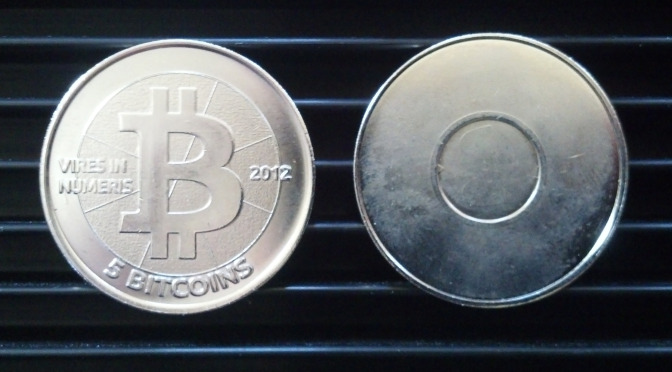 In November 2013, Mike Caldwell stopped selling funded physical bitcoins after receiving a notice from FinCEN suggesting that his sale of such products to collectors might constitute an unlicensed money transmission business.

Asserting that selling novelty bitcoin wallets to collectors might be akin to money laundering is very silly, but whether you chalk it up to institutional incompetence or malicious machination, the result was the same: Caldwell stopped selling coins, and most others in the collectible physical bitcoin space shifted to the model of selling buyer-funded coins. What you buy is just the coin and sealed key,  and to some degree the reputation of the manufacturer, and then you fund it yourself.

Lealana finally released his brass .1 BTC design as a buyer-funded coin, and it was a great evolution of his existing artwork.  He also adapted his previous designs to the self-funded model, each now bearing a hologram declaring “Buyer funded.”

Nolacoin took a similar but more permanent tack, using his powerful laser to etch “SELF FUNDED” into the metal on the front.

I was also lucky to recently acquire a couple Cryptovest physical litecoins, a CoinHoarder project, also to be self-funded.

The most fun of the lot, though, is a new .1 BTC piece from Cryptolator. While also available in copper (and in silver in a 1 BTC version), this is the “Merlin Gold” edition, a faux-gold metal which is just meant to be lovely, and it is. The pictures don’t capture the luxurious golden glow.

The design makes me giggle. Regardless of your politics, a design featuring people running out of a burning bank, dragging chains behind them has to make you smile. Are those stink lines around the edge? Maybe.

Self-funded coins aren’t entirely new, though, as Caldwell himself sold 5 BTC Casascius blanks in 2012. Unlike new coins, though, these didn’t come with key or hologram, but were simply bare nickel coins with a depression in the back.

It’s an illustration of how much things have changed, and how quickly. At 2014 rates which have, so far, hovered around $500/BTC throughout the year, a 5 BTC piece made in humble nickel and left for the buyer to assemble seems absurd, and certainly nothing that you could resell once funded. How could anyone trust that you didn’t keep a copy of the key, with so much value at stake?

Of course, 2012 started with rates around $3/BTC, so a DIY coin kit worth about $15 just seemed like good fun.

Here we are in 2014, though, so bitcointalk user OgNasty has stepped in to bridge that gap by keying, hologramming and slabbing some old Casascius 5 BTC pieces with his own holograms. It’s a hybrid solution, but since he both has experience making coins and an ironclad reputation within the community, he’s effectively putting his weight behind these coins. Should one choose to fund them, they ought to stand well beside at least the current generation of self-funded coins from reputable creators.