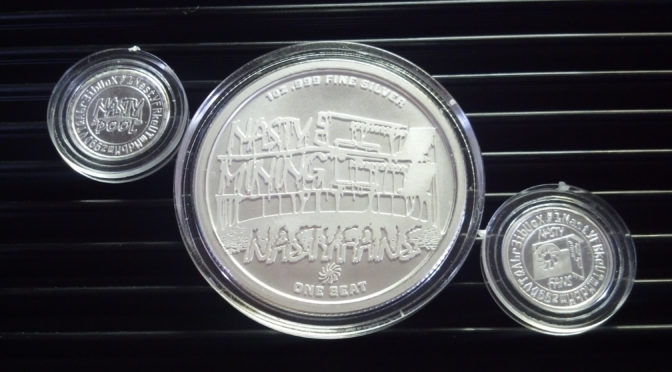 The NastyFans silver physical seat is one of my favorite physical cryptocoins, partly because it has so much going on that it’s practically alive.

But it takes some explaining.

A one-ounce .999 fine silver coin, it has a bitcoin private key sealed beneath a hologram on the back. So far, so good — standard cryptocoin stuff. It’s a little remarkable for having the public address of each coin etched along the rim, a feature that would be great to see more often.

And that all sounds completely crazy.

Here’s what it means: Nasty Mining was and is a bitcoin mining project, but unlike other more ambitious or scammier (take your pick) mining endeavors, they wanted to make sure they kept it legal, didn’t over-promise, and also, kept it fun. In time, OgNasty branched out into other projects such as a mining pool and creating collectible coins, and those things also feed into NastyFans. When you buy a seat in the fan club, you buy 1/40,0000 of the output from the various Nasty projects (since 25% is automatically reinvested into Nasty Mining). But because of the language used, they’ve kept it legal because, truly… there are no promises.

What this means for this coin is that it doesn’t have  a fixed denomination. Instead, it receives periodic payouts over time. How much?  That depends on how long you hold onto the coin, and how the various Nasty projects fare over time.

This is not a get-rich-quick sort of thing — the payouts to the coin’s address are small and infrequent.  Bitcoin mining is a tough business, and plus, this is just 1/40,000th. But after 5 years of operation (an eternity in Bitcoinland), OgNasty’s reputation is pretty much iron-clad in the bitcoin community, and the the whole endeavor can be transparently tracked via the thread at bitcointalk.org here.

So where does that leave us? An ounce of silver. A fun design, and great quality. A value that increases over time as more payouts are made to the coin’s address. And, a doorway into the bitcoin community: buy a coin, get an account at nastyfans.org, become a part of bitcointalk.org and learn about all the current Nasty projects. Learn some things. Express your opinions. Join us.

Some coins have stories, sure, but very few act as an open invitation to a whole world.