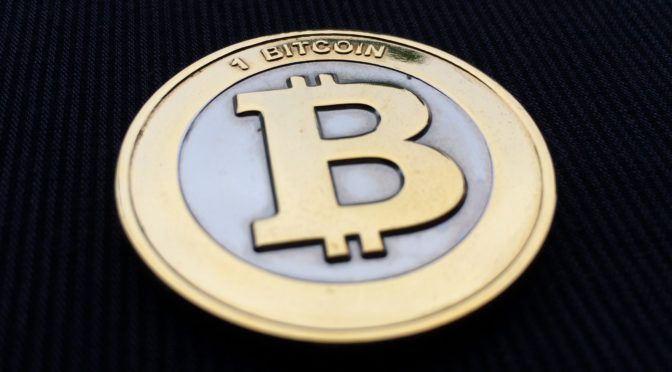 In addition to the relatively tiny-denomination (at the time) .01 BTC pieces that Microsoul made back in 2013,  he also made a much more weighty 1 BTC piece that wasn’t branded with the Microsoul name.

It only had a design on the front, and a flat reverse on which a scrambled private key was engraved and then hidden by a very heavy sticker. In a number of ways, this was a very basic design (as one might expect from an early effort), but the sheer heavy, bold shininess of it is kind of impressive. I’ve always thought it would make a better medallion than a coin, set into some necklace worn by a Bitcoin rapper (do we have those yet?).

In order to redeem the private key, the user had to follow a set of instructions to transpose some of the characters. It’s not clear to me whether or not these rules varied from coin to coin.

In 2014, Microsoul added a new denomination, a .05 BTC coin cast in 1/2 oz. of fine silver.  These had a more traditional 2-sided design, with a proper hologram protecting the private key. Unfortunately, the gold plating was very rough, and while it generally looked fine on the big gold “B,” where the date was meant to be plated it sometimes appeared as not much better than a few gold splotches. These were also a bit close to the original Casascius designs, not quite an exact copy, but not very different, either.

A very nice touch on these was having the coin numbers engraved in the rims of the coins.

In 2016 Microsoul improved on many of these weaknesses with an update of the .05 BTC coins featuring a deeper, more boldly-struck face and a new hologram design. He offered both a gilded and ungilded version.

Still unhappy with how his mint of choice was executing the gold plating, however, Microsoul opted to try gilding them by hand, which created some interesting effects. The gilding was certainly clearer and stronger, but there is some evidence of the “by-hand” nature of the process, a sort of slight waviness or unevenness in the finish. One could consider this a flaw, or an interesting quality of a very uncommon coin.