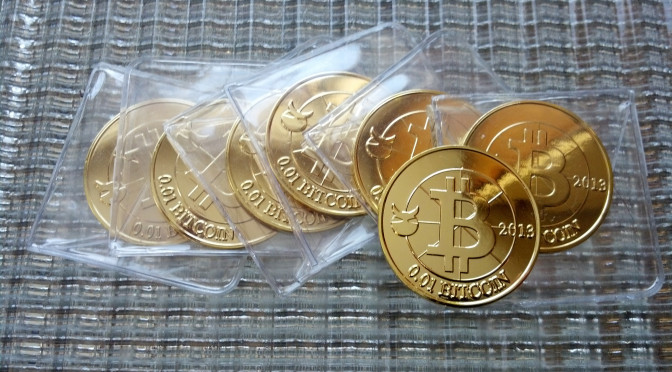 It was only last year that Casascius started making .5 BTC pieces in order to adjust for the skyrocketing exchange rate and still have a physical bitcoin that would be affordable. Then, just a few months later, Casascius, Lealana and bhCoins released .1 BTC denominations, but again, it made sense against the ever-increasing price of bitcoin.

Now MicroSoul has a .01 BTC coin. That’s one-one hundredth of a bitcoin, a bit-penny coin.  At first that seems like such a minor sum, but that’s only because my brain is inflexible and slow to adapt.  After all, at this moment a bit-penny is worth roughly 6 bucks, and if someone handed me a brand-new six dollar coin, I’d be delighted.

And, of course, I am.  While the design is straightforward and Casascius-esque, the gold plating makes the coins glow, and the small devil icon beside the “B” marks these as being extra-fun.

In terms of accountability and security, the creator (Matthew Rodbourne) has posted his identity online, states that the keys are generated by an offline Raspberry Pi and are only handled by either himself or his wife. They ship from France.

I opened one up, and the teeny-tiny key imported easily.