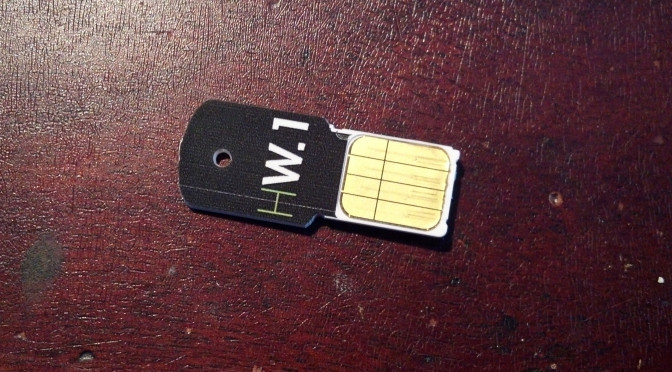 The Ledger HW.1 is a Bitcoin wallet that tackles the problem of a hardware wallet from a smartcard persective, with no moving parts and no screen. That makes it tiny, simple, light — and inexpensive.

The chip which holds your private key is embedded right in the plastic, and the tiny USB device itself arrives embedded in a  credit-card-sized piece of plastic. Pop it out of the card, bend back the flap and snap it in place and your Ledger HW.1 is ready for setup.

Setup is as simple as pointing Chrome (or Chromium) to my.ledgerwallet.com and following the instructions. You’ll receive your 24-word master seed to write down in the provided booklet, with which you can reconstitute your wallet later should your HW.1 ever become lost or damaged.

Once you’re set up, my.ledgerwallet.com can then be your wallet, too. Just plug in your Ledger HW.1 and open the website and you’ll be met with a nicely laid out, easy to use and relatively full-featured Bitcoin wallet interface.

But how can you confirm transactions securely if the Ledger has no buttons at all? If all your keystrokes and actions pass through the computer first, then is this really a secure hardware wallet?

The Ledger solution is as simple as their overall design. Each Ledger is shipped with a unique security card with a key printed on one side: a full set of upper and lowercase letters, plus the numbers 0-9, all randomly matched with their ciphertext equivalents. It’s essentially a one time pad, a cryptographic solution that’s as old-school and reliable as they come. In order to confirm a transaction, you’ll need both the Ledger HW.1 to be plugged in as well as having your security card handy to translate whatever the onscreen prompts provide you with.

Or you can use the security card to pair your HW.1 with your Android smartphone using the Ledger app, and use that as a two-factor authenticator instead.

If the web wallet isn’t to your liking, the HW.1 also works well with Electrum. It also works with Mycelium on Android, if your phone supports USB On-The-Go.

There are several players in the Bitcoin hardware wallet field these days, but Ledger distinguishes themselves in two ways: variety and price.

The HW.1 is a tiny, featherweight device and it is the least expensive iteration, but it is just one of several configurations offered by Ledger. The Ledger Nano is a more traditional USB stick with a folding metal sheath, and even comes in a version in which the Nano is embedded in a wearable rubber wristband. The Ledger Unplugged is a whole different creature, being a contactless wallet meant to work with mobile wallets such as Mycelium. We haven’t had a chance to test either of these yet, and we’re pretty sure there are even more designs in the works.

At 15 Euros (less than $20), the price of the HW.1 is hard to beat. That’s a small fraction of the cost of the competitors. Sure, it’s not as impressive to hold in your hand as something with a screen, but that’s not what you’re buying here.

The HW.1 is simultaneously a fantastic entry-level hardware wallet because of the low price, and a great solution for companies who might want to  deploy large numbers of them to their employees while keeping costs manageable.