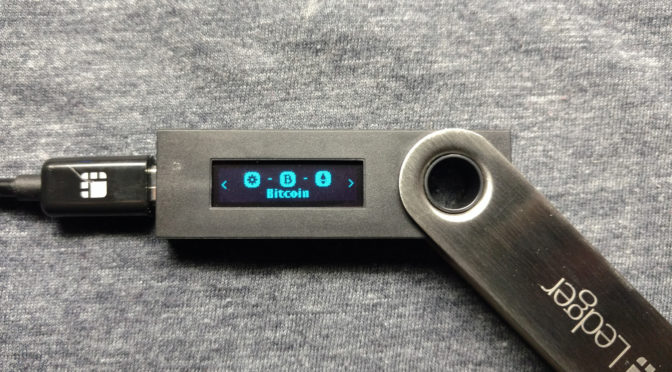 The Ledger Nano S is one of the most compact and versatile cryptocurrency hardware wallets available, and with the support of an active development team, it just keeps getting better and better.

It has a durable, unassuming design, like a USB flash memory stick, and would be perfectly at home on a keychain (and a keychain ring and dongle comes with it). While that might not be sexy and exciting, it wins points for keeping a low profile — who knows how much money you might have on there, so why attract attention to it? The Nano S feels tough, like a solid block of heavy black plastic, and the swiveling metal sheath adds further protection.

Connect it to your device of choice with the included Ledger-branded micro USB cable, enter your pin by toggling through the numbers with the forward and back buttons, choose your currency on the compact-but-bright OLED display and you are off and running.

Choose your currency? Yes, indeed — this is a distinct advantage the Nano S has over its little brother, the Ledger HW.1. Through the magic of BIP44,  one hierarchic-deterministic seed can control the keys for many different coins. Keepkey and Trezor have also introduced multi-coin support, but at the time of this writing the Nano S has built-in support for 10 different coins: Bitcoin, Dash, Dogecoin, Ethereum (and Ethereum Classic), Komodo, Litecoin, Stratis, Zcash and Ripple.

In order to get set up with these, one downloads the Ledger Manager Chrome extension, then installs an app on the Nano S for each coin one wants to use. Most will be handled by the default Ledger Chrome wallet, though some require separate extensions.  Even if the apps get deleted or need to be re-installed (such as after a firmware upgrade), all the corresponding wallets will be recreated by the master seed.

Additionally, there’s an app for FIDO U2F, so the Nano S may be used as a 2-factor authentication device with applicable websites (not entirely unlike, though not quite the same, as Trezor Connect’s password-less login).

The Nano S is also compatible with a number of third-party wallets, such as Electrum for the desktop and Mycelium for smartphones. Electrum allows for finer control of your Bitcoin addresses, and connecting it to Mycelium unlocks the excellent utility of using your smartphone’s camera as a QR code scanner.

As with all hardware wallets, the idea is to keep your private keys off your computer entirely so they aren’t susceptible to theft by malware, while still allowing for easy, convenient transactions. Compatibility with a variety of wallets goes along way toward making this work.

I’ve been using my Ledger for several months and it continues to be a delight. The two buttons along the top are unobtrusive, seem sturdy and allow for intuitive navigation: forward/back, confirm/deny. “Select” is done by pressing both buttons at once, which means the device requires two hands to use (or at least dextrous fingers).

But sometimes hardware is only as good as its support, and Ledger seems very serious about being a player in the hardware wallet space. Based in France, Ledger is already working on a third hardware wallet, the touchscreen-enable Ledger Blue,  and this would seem to show their commitment to the technology. Hopefully we can look forward to even more updates and improvements to the Nano S as the whole ecosystem continues to evolve.