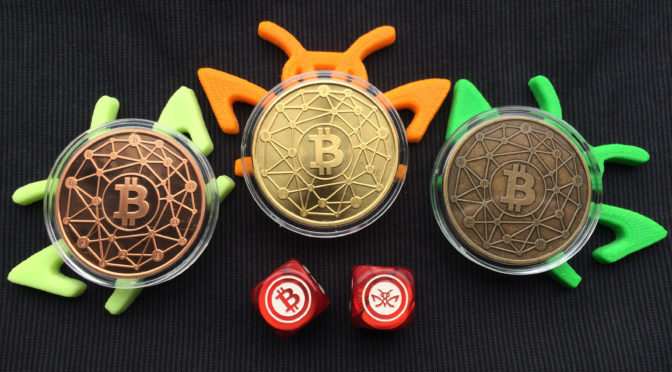 It’s always great to see new creators entering the physical cryptocoin space, and Cryptopods is taking a unique approach with their first offering, sort of like a soft launch: instead of creating a new design, they are repurposing 101 Ravenbit coins from 2014, creating new vanity keys for each (starting with “1Crypto”) and giving them all new Cryptopods holograms. The series is called “Ravenbit Podified.”

It’s not the first time someone’s repurposed some blanks with new keys and holograms (OgNasty did it with some Casascius 5 BTC pieces in 2014), but Cryptopods has given this offering the works: a limited, numbered run of 101 coins, three different metal types (brass, copper, and bronze), air-tites and laminated certificates of authenticity for each. Bitcoin dice and, uh, plastic bug things are also available with set purchases, or by request.

Apparently someone really likes bugs, probably minerjones since there’s a mantis in his bitcointalk.org avatar; digicoinuser is the other creator of Cryptopods. Both have longstanding good reputations.

These are fine coins, and it’s a great opportunity to pick up a Ravenbit coin if you missed them the first time around. The Cryptopod holograms are lovely and feature the current year, 2017, to differentiate from the “2014” originally designed into the metal. How many coins have two dates on them? Kinda neat.

A window in the holograms lets one view the series number and firstbits, both of which my be looked up  at cryptopods.com/keys/.

Cryptopods “Ravenbit Podified” coins are a very fun initial offering.  We look forward to seeing some new designs in the future.